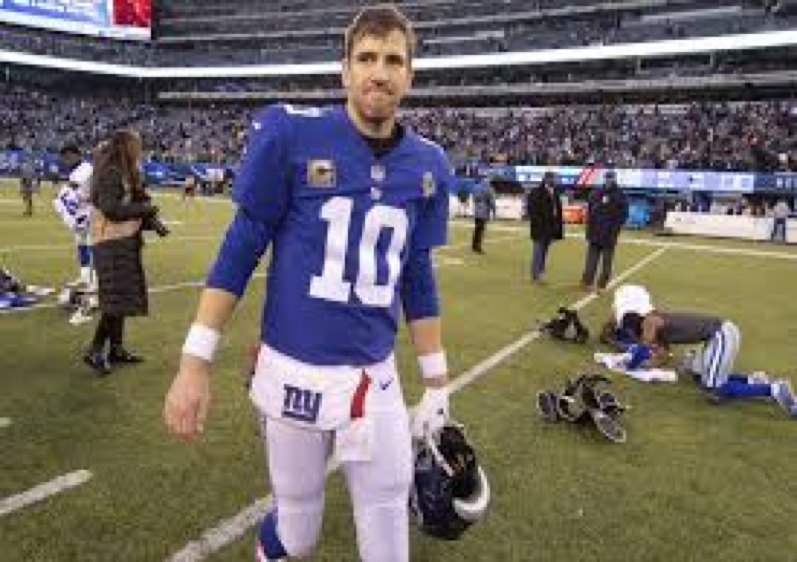 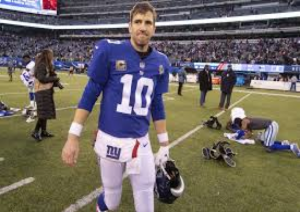 This man has gotten way more credit than he deserves

There is a treasured myth among New York football fans that Eli Manning is a Hall of Famer. The only thing more of a joke than that is the fact that Manning is still the starting quarterback for the New York Football Giants. A franchise that has been run into the ground mainly because of him. The only factor more to blame for the Giants horrid play since the start of the 2012 season, has been a fan base whose overwhelming blind support for Eli has led to him continuing as the starting quarterback year after losing year.  It’s ridiculous because Giants fans, like all fans, complain when their team losses; but in reality it is their fan base that is the main reason why they are terrible every season. Essentially the organization is giving the public what they want despite the fact that it is clearly not working.

When the Giants got off to a 2-9 start in 2017, and Manning was benched, it was treated by the fans and covered by the media as if the worse thing in the world had happened to Eli Manning. As if he was being wronged. He had a streak of 210 straight games played, which was the second longest in League history to Brett Favre’s 297, but Manning should have been benched years before that for his bad play. Good for him, he is great at staying healthy, but when you play like Dave Brown half of the time then what does it matter if you’re on the field for every game?

The team would have been better off had he been sent packing years ago, the way every other member of those two Super Bowl championship teams of 2007 and 2011 was cut loose when their performance was on the decline. Yet when Eli’s play declined he was rewarded with a four year $84 million contract. Where was that loyalty when it was time for every other player, head coach, or General Manager to hit the chopping block? Everyone points to Eli’s “two rings” when they defend him, but every other member of those teams with “two rings” are history. Why is Eli Manning the only member of those teams who is still here? Was he the  main reason they won those Super Bowls? Did the Giants win those championships behind the strength of Manning’s prolific passing arm? Ala the 49ers with Joe Montana and Steve young? Any Giants fan who are being honest with themselves know that is far from the truth.

Manning’s Week 13, 2017 benching came in the midst of the Giants worse stretch of football in a couple generations, and their worse season since 1983, when they finished 3-12-1. There is no professional football team who is 2-9 in the season’s 13th week that does not make a quarterback change. When you finish the season 3-13, second only to an 0-16 finish by the Cleveland Browns, other players deserve a chance to see if they can help the team. But it was portrayed as if Eli was the only one being demoted and was taking the blame for what was a team failure. The fans and Eli boosters in the media acted as if no other player on the team at any other position, at any point of the season, had been “demoted,” or benched during the season.  He also makes far and away the most money on the team, which is yet another problem, for to whom much is given much should be expected.

The previous season of 2016, the Giants made their only playoff appearance since the start of 2012, and they did it in spite of Eli Manning who was ranked 27th in total quarterback rating; three spots from the bottom. He was also ranked 27th in 2013 when he threw 18 touchdowns to 27 interceptions, led the entire league in turnovers and the Giants started that season 0-6!  This was less than two years after winning Super Bowl XVLI. Odell Beckham showed up the next season and saved Eli’s career. He put up historic numbers that made Eli’s numbers look way better than they would have had Beckham not been on the team. Despite having Beckham however, the Eli led offense failed to score 30 points the entire 2016 or 2017 season and went a total 36 games without reaching the 30-point mark! This in a league where teams score points as easily as water flows from a faucet. The last 6 games of the 2016 playoff season the team failed to score 20 points, a streak that went into the disastrous 2017 season and reached 8 games.

If Manning had played better in 2016 the Giants could have been championship contenders. Instead when the Giants season ended in Green Bay on Wild Card weekend, the fans and media blamed Odell Beckham, who had led a group of wide receivers to Miami and partied earlier in the week on the players off day. At that point in his career, over his first three seasons, no receiver in this era had numbers anywhere comparable to Beckham’s. His spectacular play was the Giants entire offense that season, and without him they never would have even been in the playoffs.

In 2017, with weapons all over the field, the Manning led offense struggled to move the ball and score points from the start; they began 0-5 and had their worse season in forever. He finished 22nd in total quarterback rating.  When Eli was finally benched in week 13 the media went crazy, and the fans went bonkers on sports talk radio. The fan base and the media wanted blood. The outcry Unnerved Giants ownership and management so much that the next day, on Monday, Head Coach Ben McAdoo, before his second season even finished, and following a playoff appearance in season one, plus the architect of the two Super Bowl teams, General Manager Jerry Reese, were both fired. Manning, on the other hand, has started every game since. There are different ways a player can be a coach killer, in Eli’s case it’s because when he plays bad and the team plays bad because of it, he is never held accountable; Head Coaches and General managers get fired. Even if they have “two rings” as in the case of Reese, and Tom Coughlin, who was fired as Head Coach after the 2015 season. Someone has to take the blame so long as it’s not Eli Manning.

If the unvarnished truth be told, Eli should have been gone after the 2017 season, and  he surely should be gone after the 2018 season.  But the sham continues as he failed to move the ball and put up points when it counted in 2018, and the team started 1-7 with Eli finishing the year ranked 25th in total quarterback rating. This despite the fact that with Odell Beckham, Saqoun Barkley, Evan Engram and Sterling Sheppard he had as much talent around him as any quarterback in the league. I purposely did not mention the offensive line, which has been the built in excuse for years as to why Eli plays badly every season, and why the offense always struggles as the season ends in disappointment. His lack of pocket awareness and mobility is also a reason for a number of his sacks. Even with that, Eli was the 28th most sacked quarterback in 2016, and the 16th most sacked in 2017. Giants current Head Coach Pat Shurmur better get ready to be another Eli Manning casualty on the firing line, and I’d wager my reputation that the Giants will have no success again, as long as #10 remains the quarterback.