We speak with ESPN’s Deportes Marly Rivera born and raised in Puerto Rico until the age of 16.  Today Marly is all over the place covering sports but her bread and butter is the baseall scene.  Covering both the Yankees and the Mets Marly is a straight shooter and tells it like it is.  Marly talks about growing up in her words a “very chauvinist male dominated society lke it is in latin America” where girls could only play girlie sports like swimming and tennis and how she made herself into one of the most respected baseball journalists in New York City and in the country.  She tells us how she got into the business and made a career out of it after changing jobs and leaving a career where she was unhappy, and much more. 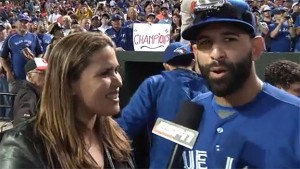 Over the years Marly has built and strong relationship with many of the players. Here she is speaking with Toronto All-Star SluggerJ ose Bautista.