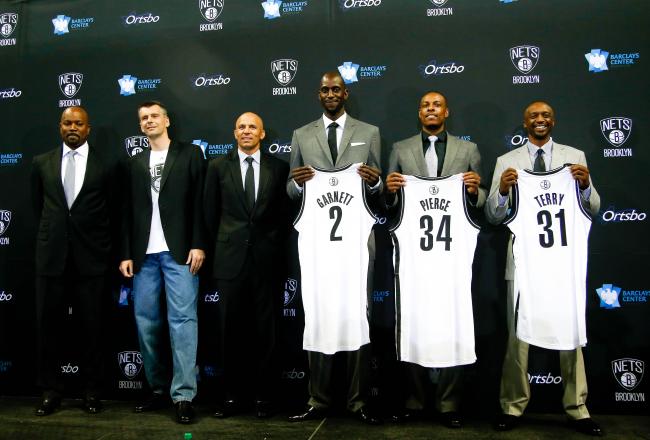 The 2012-2013 basketball season was the best in over a decade in New York City with the New York Knicks winning 50 plus games making Madison Square Garden electric and the anticipation of the Nets move to Brooklyn became a reality and another fascinating basketball story in the city.  The rivalry between the two teams was on display at the highest level last year as both teams won two games apiece and neither wanted to give an inch in the four hotly contested games.

The upcoming season which is about three months away is now highly anticipated and off-season moves made by both teams have just risen the excitement level through the roof.  Late New York Yankees owner George Steinbrenner always said that having an attractive professional sports franchise in New York City is about having stars and Brooklyn Nets owner Makhail Prokhorov is following that mantra to a tee.

When Prokhorov officially bought majority ownership of the team in early 2010 he announced that the franchise would have a championship in five years.  A few months after that during the summer of Lebron when he and players like Dwayne Wade, Amare Stoudamire, Chris Bosh, Joe Johnson, and Carlos Boozer were free agents Prokhorov put a billboard on a building that faced Madisson Sqaure Garden with he and then minority owner Jay-Z proclaiming they had the “Blueprint” for success. Give the man credit though because three years in to a five year plan he has already transformed the franchise into one of the premier teams in the Eastern Conference.

After winning 49 games last season the Brooklyn Nets acquired future hall of famers Kevin Garnett and Paul Pierce from the Boston Celtics and they also got former sixth man of the year Jason Terry in the deal.  The trade now sends the rivalry between Brooklyn and the New York Knicks off the hook especially when you consider how the three players from Boston just finished a contentious rivalry against the Knicks when they were in New England. Last season Knicks star Carmelo Anthony and Garnett got into a much publicized feud during a January game at Madison Square Garden that led to Carmelo waiting for Garnett outside of the Boston bus following the game.

The New York Knicks and Brooklyn Nets are set to stage the best rivalry in New York City sports since the Brooklyn Dodgers and New York Giants battled against each other in the National League back when the National League was one division and the teams had true hate for each other.  Since they both left for California following the 1957 season no two New York teams have been in the same division in basketball, football, nor baseball until now with Brooklyn and the Knicks.  Giants-Jets, Mets-Yankees, while those two intercity rivalries inspire excitement for fans, hype, and good competition neither of those two rivalries match Knicks-Nets because none of them play in the same division the way these basketball teams do.

Going into next season with a starting five lineup of Deron Williams, Joe Johnson, Paul Pierce, Kevin Garnett, and Brook Lopez a lot of people believe they have the best starting five in the NBA.  On July 18th, 2013 Samori Benjamin spoke with Nets general manager Billy King who is the man who orchestrated all of these moves that has led to the excitement going on in Brooklyn and the Barclay’s Center.  Samori also speaks with Brooklyn Nets minority owner Bruce Ratner who bought majority ownership of the Nets in the early 2000’s and was the mastermind behind getting the Nets moved to Brooklyn before selling Majority ownership to Prokhorov in early 2010 to give the franchise the final financial budge to get them over the edge..  We heard from Prokhorav himself along with speaking with Garnett, Pierce, Terry, and first year Brooklyn head coach Jason Kidd.  Take a listen..  With a little Jay-Z soundtrack   http://www.wbaisports.com/media/527/Brooklyns-Finest-Go-Hard