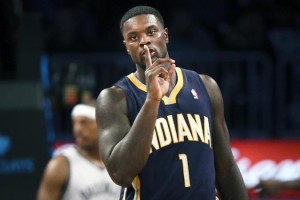 On Tuesday Night it was Bronx boy in Kemba Walker stealing the show at Madison Square Garden. On Saturday night it was a Brooklyn boy, Lance Stephenson who led his Indiana squad to his home borrow and quieted his hometown crowd with a 96-91 win to remain the NBA’s LONE undefeated team and handing Brooklyn their fist lose at home. We speak with Lance and others in this report.

On Saturday night at the Barclay’s Center in Brooklyn the Indiana Pacers who in last season’s second round beat the Knicks and then came within a hair from beating Miami in the Eastern Conference Finals and making it to the NBA Finals made their first trip of the season to New York last night. The matchup was with the championship focused Brookyln Nets in a great early season matchup that could be dubbed A “Showdown.” The game was tightly contested but when it was over it was Indiana who came away with the victory leaving the Barclay’s Center as the NBA’s only remaining undefeated team. After the game Indiana was feeling good about themselves and we were in the locker room to catch it all. 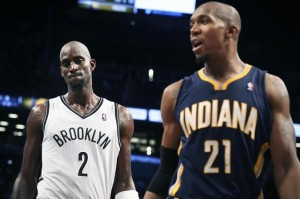 Kevin Garnett and David West always make for a heavyweight match up at the power forward position. David West spoke with us and felt good after the game. K.G. was not seen or heard from after the contest. 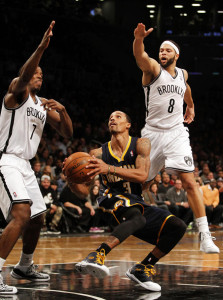 At 2-4 Brooklyn is in last place in the Eastern Conference in the early season standings. Their backcourt of Joe Johnson and Deron Williams were voices of calm and urgency in the Brooklyn post game locker room.