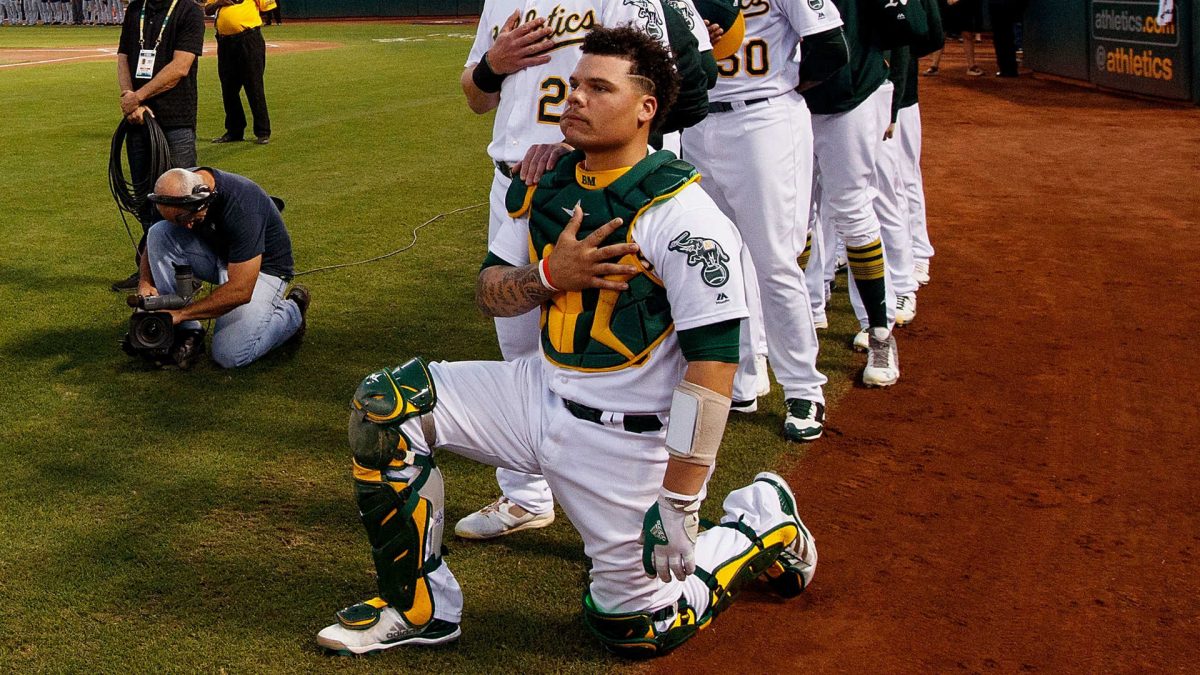 Much of the time a love for the game of baseball begins with influence from a father to the son. It is a sport where you have to understand its subtleties to have an appreciation for it. More so than the other two premier sports in the county that move at a faster pace. That is how Bruce Maxwell was introduced to the game and how it became his number one sport. His father did not play the sport past high school but it was his passion. Bruce was born on an Army base in Germany to a white mother and black father, who was serving in the army. His family settled in Alabama when he was 6 years old and by the time he was 7 he was playing on a traveling team that was competitive. His dad taught him the fundamentals of the game, some of which, for him have translated into actual life, and he continues to learn life lessons through the game, which is his safe haven. He played basketball but didn’t really like it too much. It was the same with football, even though his stocky six foot one inch two hundred and fifty-pound frame suggests he could make one heck of a linebacker, running across the field delivering punishing hits.

Alabama is a football crazed state, where the sport is life. Everybody knew that he was big and fast and could play football,  but everyone also knew where his passion was. When he was on the baseball diamond he was in his zone. People knew it and everyone respected it. No one tried to pull him into football. On the diamond he played middle infielder growing up. He attended Sparkman high school in Alabama and when he moved on to college he stayed in state attending Division III Birmingham-Southern college. There he played first and third base. A left handed hitter he hit for power as well as a good average. He beat the odds coming from a Division III school and got selected in the 2nd round, 62nd overall by the Oakland Athletics in 2012. And he was in for a surprise. If he wanted to make it to the Major Leagues, he would have to do it while learning a new position. He had a lot of athleticism, a really good arm and a high baseball IQ so the Athletics made him a catcher. Over the course of Major League history there have not been very many Afro-American catchers, and when he was drafted there were none in Major League baseball.

When he made his professional debut in Minor League, rookie ball, the organization taught him how to play the position from scratch. It was one of the hardest things he’s ever had to do. He had trouble with the position; calling the game and catching pops ups from a position that he was unfamiliar with. He was trying to do this while also trying to hit which can be tricky in Minor league baseball. There is many a story about a top minor league prospect who failed to make it through the minors into the Majors because of a hitting slump. Whether it becomes a problem hitting a curve ball or any other off speed or breaking pitch, when a hitter gets tangled at the plate and finds themselves in a struggle, it can become mental and some have never figured their way back out of it.

Bruce became comfortable with his situation and began to prosper in the minor leagues, hitting above .300 in his final minor league stop at Triple A Nashville. He was called up to the Major Leagues in 2016 and made his debut on July 23 against the Seattle Mariners. Over the final two months of that baseball season he was solid. Finishing his rookie campaign with a .282 average in 98 at-bats over 33 games. Shortly after Maxwell played in his first Major league game, San Francisco 49ers quarterback Colin Kaepernick started kneeling during the National anthem before each game in protest. Earlier that summer at the ESPY awards NBA stars Lebron James, Chris Paul, Dwayne Wade and Carmelo Anthony took the stage and challenged their fellow professional athletes to step up and use their platforms to make a difference. To speak up and out, to draw attention to important issues going on in society and within the communities that they came from.

For the remainder of the baseball season no player black, white or Latino joined the protests. Baltimore Orioles all-star center fielder Adam Jones was asked by a reporter why no Major league ball player had joined the protests that were going on across the country, not just with the NFL players but soccer players and the women of the WNBA, too. Jones responded by saying baseball was a white man’s sport and that was the reason. What he presumably meant was that there are not that many black American ball players in MLB; as just a little over 7% of the league’s ball players are black American. Therefore, there would be little support if a ball player wanted to protest. The negative reactions from the overwhelmingly white fans who do not want to hear what they have to say, and fear of being ostracized in the clubhouse by teammates, kept black ball players who wanted to speak out, from not doing so.

What Kaepernick was doing inspired Maxwell. He looked at Kap as a stepping stone to a social awareness activist movement in professional sports that has not been seen since the 60’s.  Maxwell thinks Kap will go down in history as the modern day Martin Luther King Jr.  “What he believes and what he stands for and his actions behind that happening speak volumes of himself,” says Maxwell. “his true beliefs in helping others and trying to bridge this gap between inequality and recent police brutality across the world.”

Bruce knew it was time for a change and using his platform to make a difference is something that he believes in. Being mixed and growing up in the South, which he felt was the heart of racism and inequality, made him want to express his thoughts publicly. He was fed up with things he saw taking place in America, and comments from the president’s office made taking a stand and speaking up that much more of a necessity for him. He didn’t like people being treated like they were less than the next person in this country. “With that being part of my heritage as well, I felt like that was my spot to do what I needed to do,” Maxwell said. So on September 23, 2017 during the national anthem before a game against the Texas Rangers Bruce Maxwell went down on his knee in protest. He was the first and only player in MLB to do so to this date. All things considered, it was a very brave thing to do. He jumped out there and was the first to  take an action that most fear could end their Major League career. Which is why there have not been others.

During his protest teammate Mark Canha, who is white, stood next to Maxwell and put his hand on his shoulder as he knelt, to show a sign of support. Bruce wanted all the people in our society who feel like they are being marginalized, as well as his counterparts in the National Football League and the other professional sports leagues across the country, to know that he and other players from MLB were paying attention, and that they were with them. “Even though it is predominantly a white sport, we only make up like 7.2% of the Major Leagues, but at the same time I’m sure that we all felt the same way, and I just went over the edge and I stepped up for my heritage, for myself, and to let them know that ‘you are being heard,’ and there are more than just football players that hear you, more than just basketball players that hear you. We all hear and we all feel the hurt and the struggle against the inequality around this world and around this country. So that was something big for me.”

After Maxwell made his protest the Oakland Athletics released a statement showing their support for him and his beliefs. Current and former Major leaguers reached out to him in support. His father felt proud and shares his son’s beliefs. This is a powerful rebuke to those rich tough talking chicken hawks, who dodged the draft while urging their less fortunate countrymen on to war, but now have the unmitigated gall to claim try and speak for “veterans,” when they attempt to put down the athletes who are taking a stand against police killings of unarmed black men…which could just as easily be them!

Now we have to see what fate awaits Bruce Maxwell. Will he be blackballed from Major League baseball the way Colin has been blackballed from the National Football league? Kap started the movement in the NFL, others followed. While other NFL players who took a knee are still playing in the league Kap was singled out and has been left to have his skills rot away. No team was willing to sign him over the past two seasons. Bruce Maxwell stood alone in Major League baseball. Now, it would be easy for him to be singled out and passed over by a Major League Club. After protesting at the end of the 2017 season Maxwell played the 2018 season with Oakland until he was released on September 1st. He has not signed with another team since. And now, with a little more than two weeks before the start of the new baseball season Bruce Maxwell is still without a team.  Will this be the price for protesting official murder during the “national pastime?”