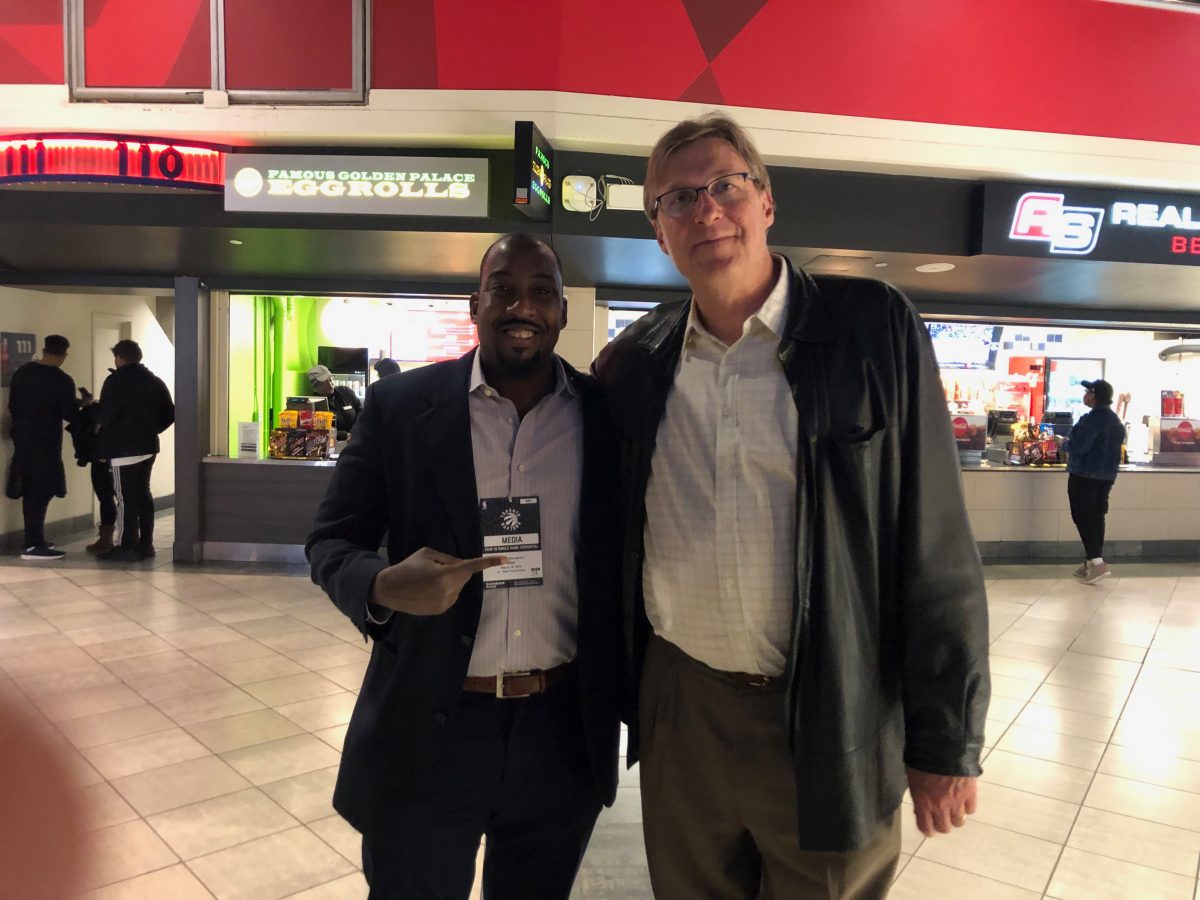 Inside of Scotiabank Arena in Toronto, Ontario, about 45 minutes before the home team Raptors take on the New York Knicks, an unassuming tall man with glasses, wearing a three quarters length leather jacket, can be seen talking to a few people on the baseline next to the visiting bench before walking with a slightly noticeable limp to the other end of the arena. He walks up the stairs behind the basket to the building’s 200 level where he plants himself in a seat owned by a friend, who is sitting in the next seat over. The man watches for a while, but with the Raptors, a top contender to win the Eastern conference, taking on the Knicks, owners of the NBA’s worst record, the game quickly gets out of hand. For a basketball lifer, a man that appreciates substance in his basketball viewing, there was nothing on the court compelling enough to keep his attention.  He leaves his seat and starts roaming the Arena again.

As he walks freely, roaming though the building, there are not many people who recognize him. It is clear however that he is somebody important. That’s the only way he could walk so comfortably through areas of the Arena that will get you hemmed up quick by security guards, unless you’re wearing some sort of credential. But there is no visiable credential anywhere on this man’s person. Whether the fans stop and stare at him as if he was Vince Carter or not, the ushers and security know who he is. This is the respect you get when you were responsible for Vince Carter coming to Toronto and joining the Raptors, which is the best thing to ever happen to basketball in Canada. A Yankee, born and raised in Chicago, he now makes his life in Canada. It is easy for this man who walks comfortably through the building as if he’s home, with the gait of a former high level baller, to be forgotten. But Glen Grunwald’s  finger prints are all over the two franchises who are playing tonight.

When the Toronto Raptors opened operations for the first time as an expansion team in 1994, Grunwald was the team’s assistant General Manager and by the end of the decade he was the General Manager. In June of 1998 he pulled off a draft night trade to acquire Vince Carter who would take the city by storm. Creating so much excitement with his aerial exploits that remain unmatched by any player in the history of the sport, plus an all-star game, that a generation of Canadians were inspired, allowing the franchise to survive in Toronto. The Vancouver Grizzlies were the other expansion franchise to enter the NBA at the same time as the Raptors. However the Grizzlies lasted in Vancouver just six seasons before relocating to Memphis, Tennessee.

It is easy for Knicks fans to forget the contribution that Grunwald made to the team as general manager of the Knicks during the lockout shortened 2012 season, which began on Christmas Day 2011, and the 2012-13 season where the team finished second in the Eastern Conference and won 54 games.  Which was the most since 96-97, and their first round series playoff victory that spring was the only playoff series the franchise has won since the start of the 2000-2001 season. “It was sort of putting a lot of pieces together, “Grunwald says of that season.  Carmelo was in his prime; we were able to pick up Tyson Chandler who was defensive player of the year. Then we brought in a lot of good veterans that had a very positive attitude, knew how to play, knew how to win, and Jason Kidd he played great for us. Then Raymond Felton got hurt and Jason had to play too many minutes in the middle of the year and I think the wheels finally fell off in his playing career, but he was great for us. So it was that, plus a combination of good coaching by Mike Woodson.” On the eve of training camp the following season, Grunwald was let go by the Knicks. They have not been back to the playoffs since.

“It’s never good to be fired and it was a tough thing to happen to you,” Grunwald says.  But Grunwald is back in Toronto these days where he is the head of the Canadian basketball program. A program whose National team has not qualified for the Olympics since Steve Nash played for them in 2000 when they finished 7th. Canada has never medaled in the modern era and only won silver in 1936, when it was a different game entirely. This can be a little misleading when Canadian basketball talent is discussed because, as Grunwald points out, Canada currently has more international players in the NBA than any other country. At the start of this NBA season 13 Canadian players were on NBA rosters, with Andrew Wiggins drafted first overall in 2014. This year Duke University’s R.J. Barrett is in the conversation for being the first overall pick but likely will fall second to his teammate Zion Williamson. “We’ve had some guys that have been unavailable for various reasons. Like any team you got to have your best players available if you want to do the best you possibly can, and we hope that will happen this year.” Grunwald says, as the Canadian team faces a qualifying tournament this summer for the 2020 Olympics next year.

He says the biggest challenge the Canadian National team faces has been financial. In his mind they have great coaching. They’ve had a strategic approach to player identification and development. They use the latest tools to support the team in Strength and conditioning, mental health, and medical science. He points to the NBA players who play for them and acknowledges “They have a certain level of care that is required for them so that we don’t jeopardize their careers.” He says it all costs a lot of money and “frankly the funding that we have received has not caught up with it.” Neither has the cost of qualification for the international tournaments. Where there used to be a one summer qualification tournament,  Grunwald says there are now six periods of competition across two years. “The cost has been difficult for us to judge and that is really where I spend most of my time, trying to get those resources so we can continue to grow and develop and win.”

The high scorer for the Raptors on this night, in what was nearly a 40-point win over the Knicks, was Jeremy Lin, the former Knick who captivated the city for a stretch in 2012. Grunwald signed him to the team after scouting him in college, through his first NBA season with Golden State where he rarely got off the bench. When Grunwald signed him early during the 2012 season he knew he had to play; the Knicks only signed him for a few days and needed to make a decision on whether to keep him for the season or not.

“I told Mike D’antoni our coach at the time, that we got to get Jeremy some minutes. He came in against the Nets, got some minutes, went in and played great.” The Knicks went on a winning streak and at that point it saved a season in which they started 8-15. It led to them turning things around and making the playoffs. Lin would get hurt before the end of that season and wound up signing a three year contract with Houston in the summer. Right before the new season began Houston traded for James Harden who dominates the ball. For Lin trying to play point guard, his opportunity to have the reins like he did with D’anotni and the Knicks was instantly gone. Two years later he was traded to the Lakers, where he had to play with another ball hog, Kobe Bryant, late in his career. The same Kobe Bryant who Lin scored 38 points and dished out 8 assists against in a February 10th, 2012 game which turned into the peak of Linsanity. “No,” Lin says when asked if he feels as if he ever got the same opportunity again that he had with the Knicks after leaving. “I think that’s very clear that I’ve never had anything close to that, but I’m just grinding, scrapping and clawing and trying to find a way.”

The two seasons before this one Lin was signed by the Brooklyn Nets, with a chance to regain some of the New York City magic in his game and reclaim the fans that he had with the Knicks. But, alas, he suffered injuries in both seasons that sidelined him for most of both. “it was more of a mental lesson and mental grind more than anything else,” Lin says of his time with the Brooklyn Nets. “and kind of the lows and disappointments that I went through is hard to express to everybody on the outside.”