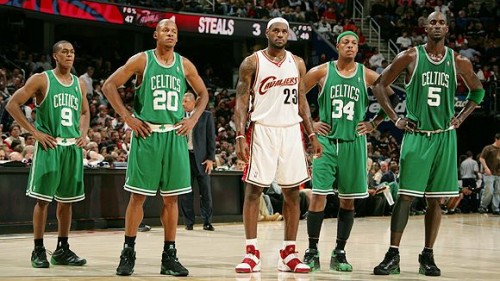 With Lebron James and the Miami Heat coming into Brooklyn, New York this evening for a preseason matchup with the Brooklyn Nets who now feature two of his all-time biggest rivals Paul Pierce and Kevin Garnett, who he has battaled with for years for Eastern Conference supremacy, since his days in Cleveland and now in Miami.  This audio report here takes a look back at Lebron James final days in a Cleveland Cavaliers uniform during his final playoff series in Cleveland which was against the Boston Celtics.

The 2009-2010 season was Lebron’s last in Cleveland and that season they won a league best 61 games and had the top seed in the Eastern Conference.  In the second round they met up against Boston who had knocked off Lebron and the Cavaliers two years prior in the same round in a series that lasted seven games.  Boston would go on to win the NBA championship in that season of 2008.

So in 2010 when the two teams met again in the Eastern Conference’s second round the Celtics had come off a 50 win regular season when they came into the playoffs with the perception that they were an old aging team on their last legs.  But Boston was led by point guard Rajon Rondo and a big three that included Ray Allen, Kevin Garnett, and Paul Pierce along with NBA champion Rasheed Wallace.  This report focuses on a game 2 blowout in the favor of Boston on the King’s Court which STUNNED Everybody.  In this piece we speak with Boston swingman Tony Allen who was given the assignment of guardingJames and we also speak with Boston head coach Doc Rivers and hear from Cleveland Cavaliers head coach Mike Brown.