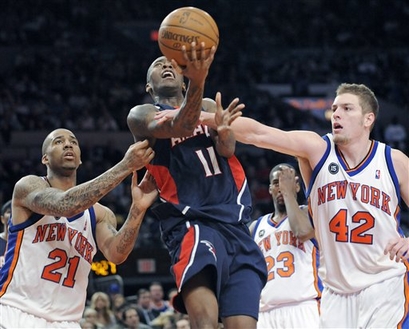 Jamal Crawford has been one of the best ball handlers and scorers in the NBA for a long time but for the first nine seasons of his career Jamal failed to make the playoffs.  From 2004 through 2008 Crawford played for the New York Knicks and left a lot of memories in the garden including a 50 plus point explosion against the then defending champion Miami Heat at Madison Square Garden.    Jamal Crawford was traded away from the Knicks to the Golden State Warriors in November of 2008.

In March of 2010 Crawford was a member of the Atlanta Hawks and on the verge of winning the sixth man of the year award and making the playoffs for the first time in his career.  At the time Jamal Crawford had the longest games played streak in the NBA without making the playoffs.  In this report we spoke with Jamal about it all along with then Atlanta Hawks guard Joe Johnson, then Hawks head coach Mike Woodson, and more.