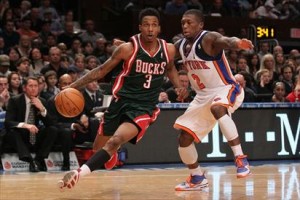 Brandon Jennings torched the Knicks in his ever game there as a pro making him feel great inside doing it to the team that did not find him worthy enough to draft.

The New York Knicks had the opportunity to draft point guard Brandon Jennings in the 2009 NBA draft. Before the draft Jennings made a point of saying that he wanted to play for the Knicks. He practiced for them and everything and it seemed like he was a great fit for a team that at the time desperately needed a point guard. Yje Knicks did not pick him and for a while after Jennings became a Knicks killer always playing big against them. This report right here was from the night Brandon Jenningsm made his first ever appearance at Madison Square Garden after be passed up by the Knicks. Jennings had a great night on the Garden floor making the Knicks pay. We were there to cover it all.