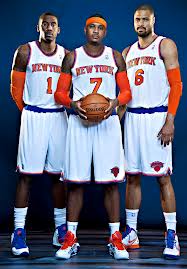 A little over two years ago before the start of the 2011-2012 basketball season Amare Stoudamire, Carmelo Anthony, and Tyson Chandler were being billed as the best front line in basketball. Now at the all-star break in February 2014 with a hideous record of 20-32 that would not even place them in the playoffs if it started today these three men held court in the middle of the Knicks locker room another disastrous loss trying to explain the state of the team. The latest loss coming to the Western Conference’s worse team headed into the all-star break.

A little over two years ago these 3 men were supposed to be the best front line in the NBA. Now at the 2014 all-star break the vision of two years ago looks lost.