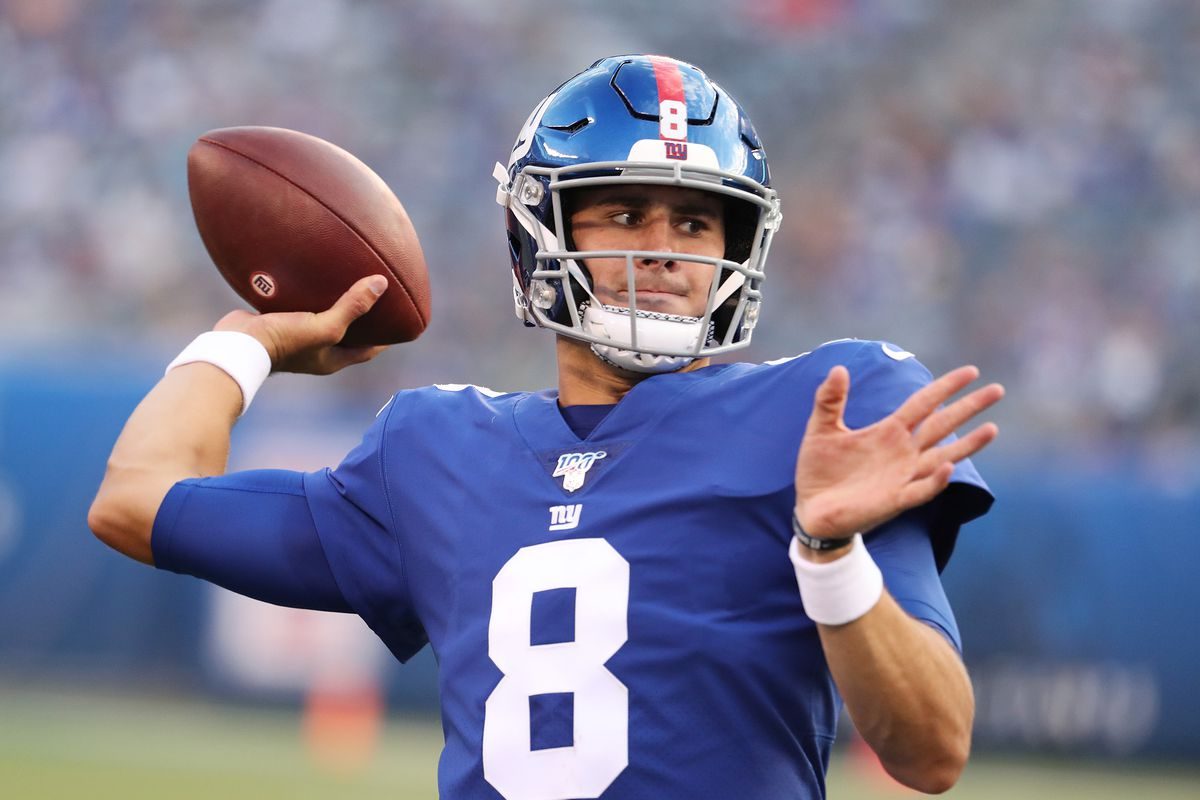 When the Giants selected Daniel Jones with the 6th overall pick in last April’s NFL draft Giants fans immediately had nightmares of Dave Brown, who is arguably the worse quarterback in Giants history.  Their fears were incited by the fact that Jones came from the same school, Duke, and wore the same number, 17. De ja Veux, they wondered? The most hardcore NFL fans would be hard pressed to name another football player who came from Duke. But the reality is this, over the last seven seasons as the Giants have had their worse stretch of football in 40 years, Eli Manning has often times looked as inept as Dave Brown did in the 90’s. Which should make the decision to start Jones from week 1 an obvious choice. Especially since Jones has looked as good as he has in preseason with the limited work that he’s had. If anyone believes Eli Manning gives the Giants a better chance of winning football games they are living in a dream world.

Two seasons ago the Giants started 0-5 and finished 3-13; the franchise’s worse record since 1974 when they finished 2-14. Last season they started 1-7 and again, blew any chance of making the playoffs. Only the Cleveland Browns have had a worse record than the G-Men over the past two seasons, and the Browns are set to light the NFL on fire this season, in part because of the Giants gifting them Odell Beckham Jr, who has put up as good of numbers early in his career as any receiver who has played the game. Saqoun Barkley joined Beckham in the Giants lineup last season and they were as good a receiver/running back combination as any in the league, yet the offense led by Manning was still inept. In what world would anyone reasonably think Eli Manning gives the Giants a chance to win?

When Manning was given the starting quarterback spot back in 2004 with the Giants at 5-4 and Kurt Warner was the starter, still in the thick of the playoff race, the organization and the fan base only cared about getting on with the future and beginning the Eli Manning era. So Manning was given the job even though it was likely that he’d struggle as most rookie quarterbacks do and the Giants would fall out of playoff contention because of it. But nobody cared that maybe the Giants might be able to barely sneak into the playoffs without a realistic sense that a championship could be won by that team; which still had a ways to go in acquiring championship caliber talent. The Giants went on to lose all but one of their final seven games, salvaging the final game with a win over the Dallas Cowboys. No one cared that the Giants finished 6-10. The Giants had invested a top first round pick on Manning, he was the future, it was time for the Giants to move forward.

15 years later the Giants thinking should be no different regarding their quarterback situation. There was a stronger case for Warner to start the season in 2004 than there is for Eli starting now, because Warner was not that far removed from success at the position.  Having quarterbacked the St. Louis Rams to a 14-2 record and a Super Bowl appearance just three seasons prior, when he led the league in touchdowns and won his second AP MVP award. Eli  has not had a successful season since the Giants won Super Bowl XLVI.  That was eight years ago!

When Phil Simms led the Giants to an 11-5 record and a playoff win over the Minnesota Vikings in 1993, the organization still decided to get rid of him in favor of Dave Brown. Simms was a respected franchise quarterback who had two championship rings just like Manning. But that didn’t prevent the Giants from getting rid of him. In the case of Manning the two championships has been the end all and be all as to why he has been allowed to keep a job all these losing years.  As bad as Dave Brown was, the team was never as bad as 3-13 the way they were with Manning in 2017. Brown’s Giants never won a measly eight games over a two year stretch the way Eli’s Giants did the past two seasons. Eli’s 18 touchdown, 27 interception 2013 season, when the Giants started 0-6, is as bad as any season Brown ever had, and Manning led the NFL in turnovers. Something Dave Brown never did. Eli even had more turnovers than Geno Smith that season, when Geno was a rookie with the Jets. But when the Giants were 2-9 in 2017 and the Giants benched Manning, the way any 2-9 team would have done, and gave Geno Smith a shot to see what he could do, the public went off!  They acted as if Geno was unworthy of starting a football game for the New York Giants.

What is the point in having Eli start week 1 here in 2019? To be nice to him? The Giants owe Manning nothing and have paid him handsomely for being the quarterback of two championship teams. He has not been productive now for the Giants in many years and frankly he has held them back as they have underachieved, but he seems to be the only one who is never held accountable. If he had, the organization would have already gone in another direction. If the name of the Giants quarterback the past seven years had been anyone other than Eli Manning, the fan base would not have stood for it and ran that guy out of town. But the fan base, and the giants organization, have remained loyal to Eli at the expense of the other 52 guys on the team.

The Giants have lost all standards of accountability when it comes to Manning, and for years now they seem to care more about appeasing him and making him happy than winning football games. How many quarterbacks in the history of football have missed the playoffs six times in seven seasons and has kept their job? The only one that I could find is his contemporary Philip Rivers. But Rivers career record is 118-90 and San Diego, led by Rivers, was one of the best teams in the NFL in 2018. Another contemporary of theirs Ben Roethlisberger, has a career record of 144-69-1. Manning’s career record is 116-114. If Manning plays 16 games in 2019 he certainly will end the season with a career losing record. It is way past time for the Giants to do to Eli what they did to every teammate of his from those Super Bowl winning teams years ago, say goodbye. Jones gives them the best chance of winning football games anyway.