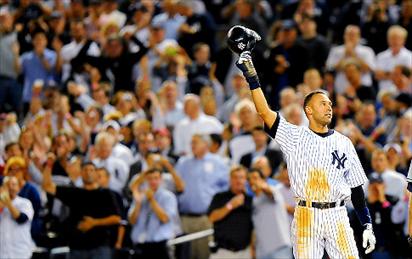 On the night Derek Jeter Tied Lou Gehrig as the Yankees all-time career hits leader we spoke with B.J. Upton in the opposing clubhouse wears number 2 to this day to honor the captain. Listen Here: http://www.wbaisports.com/media/117/Jeter-Ties-Gehrig

On September 9th 2013 New York Yankees shortstop Derek Jeter tied Lou Gehrig as the all-time Yankees hits leader.  The opponent that night was the Tampa Bay Rays and on the other side of the field was Rays outfielder B.J. Upton who grow up a big fan of Derek Jeter’s in Norfolk, Virginia and wears Jeter’s number 2 to honor his favorite player growing up.  We hear from Derek Jeter and we speak with B.J. Upton.  Take a listen..  http://www.wbaisports.com/media/117/Jeter-Ties-Gehrig